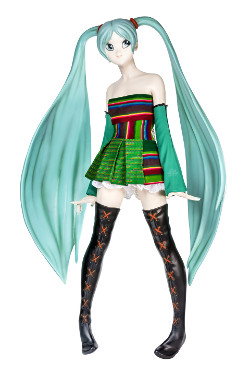 Did you know that Hatsune Miku, whom you can meet in our museum, in 2014 was chosen by the Time magazine as one of the most influential fictitious persons in the world?

The computer-generated Japanese singer, whose “voice” is made of many samples of real human voices, as a real cultural phenomenon provoked a debate about the nature of art. As a hologram, she participated in Lady Gaga’s concert in Madison Square Garden, and on another occasion in David Letterman’s Late Show.

Hatsune Miku, who welcomes visitors in the entry hall to the National Ethnographic Museum in Warsaw, is wearing a dress inspired by a Polish folk costume. This time Teresa Seda, a fashion designer, used traditional textiles from the Łowicz and Sieradz regions.

The video shows Hatsune Miku singing a song in Polish!

Hatsune Miku (the name translates into “the first sound of the future”) in the museum is a Polish-Japanese project created by: Teresa Seda (costume designer), Akamine Hidetoshi (sculpture), and Elżbieta Czyżewska (project’s curator and producer).