We invite you to the temporary exhibition “New Inuit Art. Współczesna sztuka Inuitów z Kinngait” prepared by the West Baffin Eskimo Cooperative in Canada and the Culture and Heritage Foundation. The partner of the exhibition is the Canadian Embassy.
The exhibition will be open from 15th of March till 26th of June.

The history of Inuit art is rich with diverse approaches to depicting history, the land, environment, wildlife, traditional practices or mythologies. On the one hand, the creative expression that emerges from Kinngait has documented with precision the artists’ Arctic world. At the same time, on the other, the work guides us through moments of pure imagination. From a historical perspective, Inuit artists have given us glimpses into daily living, such as representations of Igloo dwellings and their contents and perhaps illustrations of hunting and country food preparation. That early imagery, mostly communicated through the printmaking medium, rapidly built an international following for the Inuit art of Kinngait. In a contemporary context, Inuit art has become increasingly known for synthesizing older artistic conventions with new and current influences. The North is a constantly evolving and increasingly dynamic place; developments in architecture and technology are apparent, fostering a growing interconnectedness between local communities while facilitating bridge-building with the South and internationally. 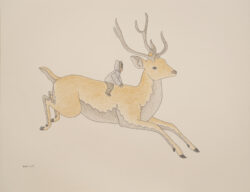 The heart of the New Inuit Art exhibition features printmaking, drawing and sculpture created in the last decade by artist members of the West Baffin Eskimo Cooperative, which established its Kinngait Studios in 1959. In the Canadian Arctic, Kinngait Studios is the oldest fine art atelier in Canada, emphasizing the printmaking medium. Współczesna sztuka Inuitów z Kinngait is the exploration of highly contemporary narratives from a uniquely Inuit perspective while demonstrating that the work continues to reflect essential aspects of Inuit culture, such as a powerful sense of history, a deep connection to the land and a kinship with the animals that share this Arctic environment.

Presented in the context of the National Ethnographic Museum in Warsaw, this exhibition resonates with the unexpected; traditional subject matter shown in highly unusual ways or imagery that entirely departs from what we associate as Inuit. Creatures born of pure fantasy, places as familiar as they are altogether foreign, typical activities like hunting are counterpointed by the unexplained; all coexist in the exhibition and serve to illustrate a diversity within the Inuit art milieu. The discipline of ethnography, and the associated study of anthropology, were almost exclusively the lenses through which Inuit art and other Indigenous were creatively viewed. That is to say, Inuit creative expression was undoubtedly seen as essential and unique, but the vocabulary of analysis was something other than that of the modern or art, more in the realm of an artifact. It is intentional that the exhibition both acknowledges and resists that classification, situating itself in the domain of contemporary art. They were inspired by the Inuit art history of Kinngait, fuelled by experiences of life in the North, straddling tradition and the now, New Inuit Art. Współczesna sztuka Inuitów z Kinngait is about an expression of artistic duality, one that is distinctly Inuit. “New Inuit Art. Współczesna sztuka Inuitów z Kinngait” is curated by the West Baffin Eskimo Cooperative.

As a response to the war in Ukraine the exhibition „New Inuit Art. Współczesna sztuka Inuitów z Kinngait” will conclude with an online charity auction of two works that will be hosted on Artinfo.pl. The entirety of the proceeds will go to humanitarian aid for Ukraine. This way, indigenous artists from Canada will show their support. 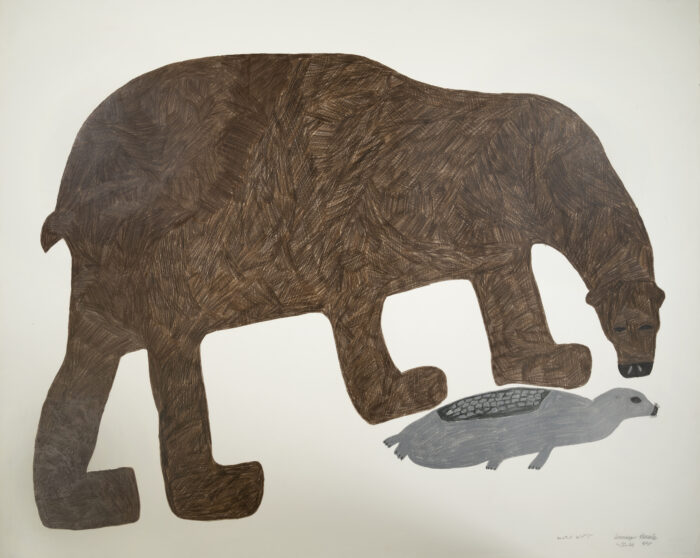 Below we present biographies of all the artists whose works will be presented at the exhibition “New Inuit Art. Współczesna sztuka Inuitów z Kinngait”.

Saimaiyu Akesuk (1988, Iqaluit) Saimaiyu Akesuk (born 1988) is a Kinngait Studios artist who was born in Iqaluit but has spent the majority of her life in Kinngait (Cape Dorset). Her images of birds and bears are characterized by a bold and dynamic simplicity rendered with soft tenderness and often a touch of whimsy. Akesuk participated in 2015 The Brooklyn Museum Inuit Artist in Residence Program and was featured at the 2017 Inuit Art Symposium, hosted by The Drake Hotel in Toronto.

Ningeosiaq Ashoona (1977, Saturituk) is one of the only female sculptors working in Kinngait today and has been deeply influenced by the history of women working in carved stone. Her favourite subject is the loon, which she often interprets conventionally but can also create hybrids with multiple heads or in states of transformation. Ashoona has been carving since 1998 and has had numerous solo exhibitions across Canada.

Shuvinai Ashoona (1961, Kinngait) first came to prominence in the late 1990s, when her work was included in the 1997 Cape Dorset Annual Print Collection. She emerged as one of the most recognizable Kinngait artists working today, with an aesthetic that incorporates both renderings of traditional Inuit culture to the imagery drawn from pure fantasy. Her work has been exhibited at museums and galleries across Canada, internationally, and in many important festivals, including La Biennale di Venezia, Sydney Biennial, and Site Santa Fe. In 2018, Ashoona was the recipient of the prestigious Gershon Iskowitz Prize.

Kellipalik Kudlu (born 1982 in Iqaluit) comes from an artistic family. He learned the art of carving in stone from his father and brother. He created his first sculpture, a traditional Inukshuk, a sign / signpost in the shape of a human, in the mid-90s. The gift for working with stone allows him to precisely extract the details, while respecting the specific and demanding properties of this material. When creating, Kudlu is inspired by the history of Inuit art, the world of nature and his own, extremely rich and magical imagination, and his favorite motifs are Inukshuks, birds, seals and masks.

Qavavau Manumie (1958 Brandon, Manitoba) works in the drawing medium and as a master stonecut printmaker. He has demonstrated a range of stylistic abilities over the years, from the very literal to the more expressive. Manumie’s work is distinctive and often amusing in his depictions of Inuit legends and mythology, Arctic wildlife and contemporary aspects of Inuit life. He is the latest among the second generation to attract critical acclaim from the modern arts audience in the south. His work has been included in the Sydney Biennial and Toronto Biennial of Art.

Johnny Pootoogook (1970, Kinngait) is a talented sculptor, graphic artist, and printmaker. His work is inspired by his Inuit culture and depicts a wide range of subject matter, from nature studies to depictions of community life. Pootoogook has had several exhibitions throughout his career, and his work resides in several prestigious collections, including the Canadian Museum of History and TD Bank.

Palaya Qiatsuq (1965, Kinngait) works in soapstone and bone, often favouring owls, dancing bears, people in traditional everyday activities, such as hunting or fishing as subject matter. Although frequently stylized, his work’s observational quality conveys the close relationship to nature and the local environment. Qiatsuq has demonstrated, lectured, and shown his artwork across Canada, Europe and the United States.

Pitseolak Qimirpik (1986, Kinngait) is at the helm of a surging generation of Inuit artists practicing the traditional approach of stone carving but juxtaposing that material history by exploring highly contemporary signifiers in their work. From eroticism to weird hybrid creatures and from placing iPods on all manner of people and fauna to Simpsons characters, Qimirpik seeks inspiration from the history of Inuit art but borrows his subject matter from the here and now. He will update conventional subject matter by anthropomorphizing the activity of animals or adding pop culture props and other unexpected elements.

Ooloosie Siala (1991, Kinngait) explores many diverse themes in her work but frequently returns to her unique depictions of Kinngait landscape and wildlife. Saila’s drawings and prints rely heavily on rich colour and abstract forms to capture the land, sea, and sky surrounding her Arctic community. At the early stages of her career, she draws increasing attention from Canadian and international collectors.

Toonoo Sharky (1970, Kinngait) is recognized for his mastery of stone, new tools and techniques. Although constantly evolving, his work currently takes the form of birds, fish, Shaman, transformations or masks and often features different coloured serpentine stone inlay to create the eyes of the subject. Sharky principally sculpts on the larger scale and sometimes takes the stone medium to its limit by carving it very thinly, resulting in uniquely fluid pieces.