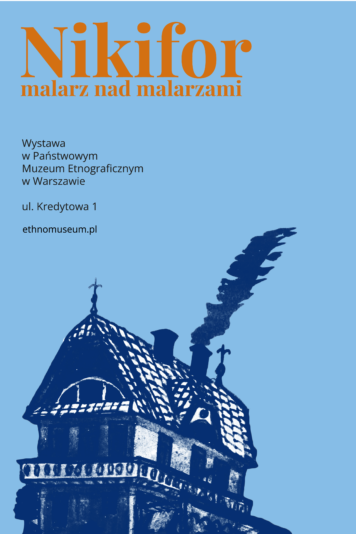 Nikifor’s monographic exhibition, one of the most famous naïve painters in the world, whose works are in the collections of the most important European ethnographic museums and outsider art collections, is now open for visitors.

The exhibition presents 135 works from the collection of the National Ethnographic Museum in Warsaw by the artist made on paper in many techniques including watercolor, gouache, pencils and crayons. The presentation covers all topics taken up by the painter: landscapes, urban and fantasy architecture, railway stations, interiors of temples and shops, and figures of saints. In all the works one can clearly feel the atmosphere of the Greek Catholic religion in which the painter grew up, the Lemko culture and the atmosphere of a small town; his hometown of Krynica, located in Beskid Sądecki. The exhibition also plays an educational role by introducing everyone to a natural talent, a great colorist and allowing you to appreciate the artistic value of his works.

His work was appreciated by eminent Polish artists; Zygmunt Waliszewski, Tytus Czyżewski, Jan Cybis, and after World War II Alfons Karny and recently Edward Dwurnik. As the inexhaustible popularizer of Nikifor’s painting, Aleksander Jackowski (1920-2017) wrote, “Over a thousand articles have been written about Nikifor, four films have been made, and a few books have been published – more than about any Polish painter and probably more than about any creator of naïve art” (in: A. Jackowski, “Świat Nikifora”, Słowo/obraz terytoria 2005 p. 154).

Nikifor – Epifaniusz Drowniak was born in Krynica in 1895. His mother, a Lemko, was a maid in guesthouses in Krynica. His father is unknown. Due to a speech impediment, people perceived him as disabled. He began to paint early, treating pictures as a form of contact with the world and a way of earning money. In 1930, the artist Roman Turin from Lviv, as well as painters from the circle of Colourists, became interested in Nikifor’s works. As early as 1931, an exhibition was organized in Lviv, and the following year, Nikifor’s works were shown at a collective exhibition in Paris.

Exhibition curator: Alicja Mironiuk Nikolska – ethnographer and senior curator with great museology experience (35 years). She is interested in contemporary folk and naïve creations as well as their creators. Author of many exhibitions, publications on folk art and the book „Polska sztuka ludowa” (Muza 2010). Chairman of the Folk Art Section in the Scientific Association Council of Folk Creators and part of the jury for the Oskar Kolberg Awards of the Polish Folklore Society and the Polish Association of Museum Cataloguers. Honored with the „Merit for Polish Culture” award, In 2020 awarded with The Silver Medal for Merit to Culture – Gloria Artis. In 2021 awarded with the Gold Cross of Merit by the President of the Republic of Poland for her contribution to the project of national heritage and promotion of folk culture.

Important information: the lights in the exhibition are dimmed to the conservation requirements, which define the permissible intensity of light falling on the object up to max. 50 lux.

Project co-financed by the PZU Foundation and the self-government of the Mazowieckie Voivodeship.

The National Ethnographic Museum in Warsaw is an organizational unit of the self-government of Mazowieckie Voivodeship.